Touch means freedom! There is nothing as intuitive as a touch. Touchscreens provide a “language free” interaction between people and machines or apparatus and the smart phone and later on the tablet have had a great influence on that. More and more solutions are making the transformation from a one direction transmitter to a dual direction data transfer tool, for example wearables.

Especially our customers that service international markets can appreciate the simple interactivity of the combination of display and touch.

Resistive is the technology where a transparent front foil is pressed down to the below carrier thus resulting in a lower resistance value on that spot. There are 2 types that are widely in use namely:

Resistive 5-wire – Mainly used in industrial applications (due to higher reliability) and larger type of screens.

Projected Capacitive touch(often abbreviated as PCAP or PCT) is offered in 2 versions, the standard size where sensor and carrier glass are identical (to a display) and the version with cover glass.

In most cases PCAP touch is still more expensive than standard R4W, also due to the touch controller integration. High demand is closing the gap between resistive and projected capacitive. 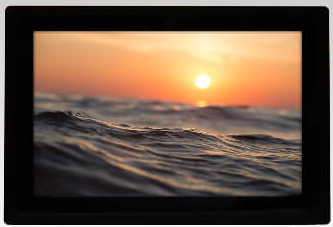 We use cookies on our website to give you the most relevant experience by remembering your preferences and repeat visits. By clicking “Accept”, you consent to the use of ALL the cookies.
ACCEPTCookie Settings
Manage consent

This website uses cookies to improve your experience while you navigate through the website. Out of these, the cookies that are categorized as necessary are stored on your browser as they are essential for the working of basic functionalities of the website. We also use third-party cookies that help us analyze and understand how you use this website. These cookies will be stored in your browser only with your consent. You also have the option to opt-out of these cookies. But opting out of some of these cookies may affect your browsing experience.
Necessary Altijd ingeschakeld
Necessary cookies are absolutely essential for the website to function properly. These cookies ensure basic functionalities and security features of the website, anonymously.
Functional
Functional cookies help to perform certain functionalities like sharing the content of the website on social media platforms, collect feedbacks, and other third-party features.
Performance
Performance cookies are used to understand and analyze the key performance indexes of the website which helps in delivering a better user experience for the visitors.
Analytics
Analytical cookies are used to understand how visitors interact with the website. These cookies help provide information on metrics the number of visitors, bounce rate, traffic source, etc.
Advertisement
Advertisement cookies are used to provide visitors with relevant ads and marketing campaigns. These cookies track visitors across websites and collect information to provide customized ads.
Others
Other uncategorized cookies are those that are being analyzed and have not been classified into a category as yet.
OPSLAAN & ACCEPTEREN